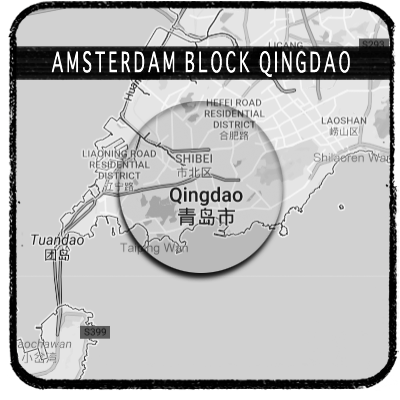 Everywhere in China in new housing development projects one can see the repetition of identical units both vertically as horizontally. There is much uniformity. Here, in plot A6, a new strategy has been followed: the blocks have been brought back into hierarchy and the houses have been individualized. This has been done in order to bring back human scale in the living environment of the big city life and to make an agreeable and understandable place to live.

By distinguishing three levels of perception, the large buildings become of an acceptable and even tactile scale.

The first, largest scale level is that of the city, here we can experience individual towers, as identities, from large distance. So, from a distance a range of dissimilar towers can be seen on the highest level of the plot. These “identities” protrude from the building ensemble and are materialized in 3 different kinds of grey plasterwork, from light to dark.

Then, secondly, there is the scale level which still has contact with people on the ground floor, the stories up to the eight, nine floors. This in fact the height where one becomes detached from earth activities. This middle level is also made visible in the design by materialization which reminds us of the natural stone in the historical German architecture in Qingdao. A kind of “city wall” which reminds of the natural stone base of the historical architecture and colors a bit yellow, the most well-known color in Qingdao.

The last scale level is the one on the ground and first floor, which consists of the commercial spaces. This is the place where one can actually touch the building and has the closest perception of things. Therefore, materials here are fine and small and there is much detail in the facade.