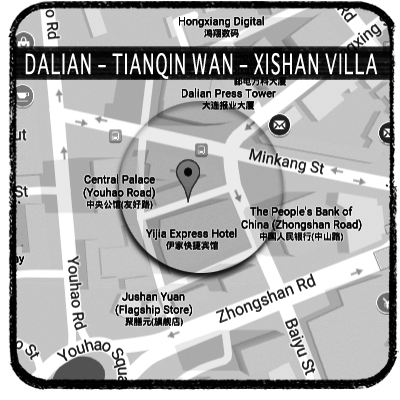 This project is located on a narrow linear plot, between an ongoing public road and a small hill, starting on the east side near the reservoir. It is a part of a larger project with on the south side townhouses and villas, which are located on a higher level. The project is a mix of public and private functions: residential small towers, retail units, SOHO and a sales center.

The public and private functions are functionally separated but connected by using similar forms and materials. In this way the different elements together are forming a whole, instead of all incidents.

The north- south orientation of the narrow plot inspired to make a composition of two lines of towers which come together in the middle. Important is the transparency of the configuration, translucent in order to get sun in between the buildings. The sun can penetrate to the inside, the heart of the area. The total built volume has been divided as much as possible to create balance, thus making the living area as relaxed as possible, with a human scale. The two parts, townhouses on the south side and this mixed project on the north side are connected by use of brickwork in a light brown color. The projected is designed in a style of modern architecture with rich materials and fine detailing. Showing clear and strong forms with contrasts and harmony. Natural stone, brickwork, plaster and glass are the main materials. The facades designs are compositions of horizontal lines and vertical elements with the exception of the center building (sales center/ commercial) which emphasizes the entrance road.

The residential program is formed by towers with two apartments per floor, standing in two rows, in order to create optimal stand-alones. This allows more view for the residents, more sun in the middle area (roof garden), but also creates more identity for each house. And last but not least this brings down the scale of the living environment to a friendly human level. Basically on the south side the darker brickwork covers the sunny facades while on the north side a light natural stone gives a light exterior. Instead of repetition of each unit or floor, a dynamic movement is created by articulating the window frames.

The commercial plinth is formed by retail units over two floors, with an own identity. The shops look independent by making a clear parceling and are covered with natural stone in a stylish pattern, creating an elegant high class décor. There is much glass on both floors and the advertisement area is clearly framed to make it less dominant. A canopy protects shoppers from rain and completes a high end façade.

The SOHO building is of a larger scale and designed as one solid volume which becomes transparent and interesting by its dynamic movement and holes on the street side.

The layout is based on a central corridor with units on both sides. On the north side the holes create semipublic spaces in the building on the side of the public realm near the public road.